I don’t know what happened.

I don’t know why it happened.

I just know that I wasn’t expecting it!

Why is that such a big deal? In the end #Millennials is not performing particularly well on Tapastic (https://tapastic.com/series/Millenials) and finally even on Webtoon it doesn’t enjoy great ratings (http://www.webtoons.com/en/challenge/millennials/list?title_no=29461) so maybe I’ve just got lucky.

But even if I had, even if this wasn’t well deserved at all, even if tomorrow all my subs were to disappear, nothing and no one will prevent me to consider this an amazing achievement for many reasons.

A long and winding road.

10 years ago I stopped drawing.

I had started when I was very little, at the age of 10 I draw my first strip comic (‘Gingle, the pig who’s single’), at 12 I was bored with classical painting and I approached manga style, at 15 I have been the youngest student at my region’ school of comics.

I kept on drawing throught university years and by the time I’ve got my first job, at the age of 23, I was already selling my works as an artist, working with a talented colorist, with whom I thought I was going to move to London to try to get a carreer as a fantasy illustator. I was preparing my second illustrated book, with my bags ready.

But then something didn’t work out as planned.

My carreer plans were shuttered and I even got seriously ill.

I had to give up everything and I decided to change country (for the 4th time in few years) and to start a new life, were there was no room for pencils.

The dream bottled in the drawer. 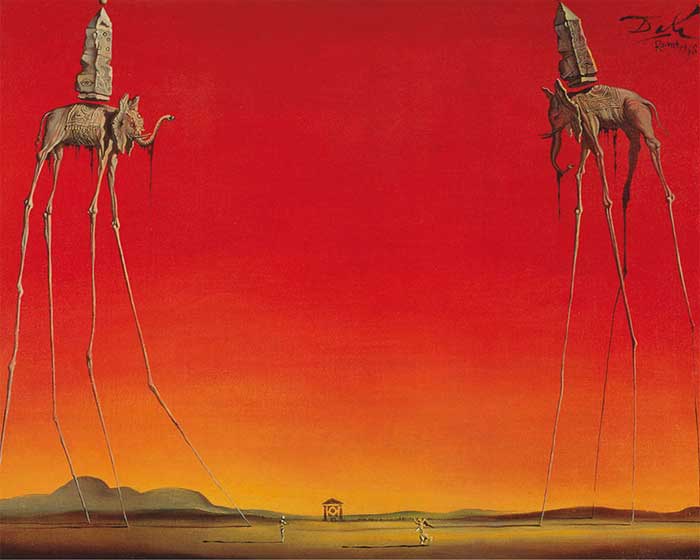 Many years have passed by since then, precisely 10 years, and I’ve got in trouble again.

I’ve been jumping from job to job, always unhappy, always looking for ‘something else’ and feeling guilty for doing that. “You should be happy with what you have” was my mantra, the one that I’ve decided to use to make myself even more unhappy.

‘The Elephants” is the Salvador Dalí painting who has accompanied me since when I was 15. Since the years of the comic school. It’s the first thing that I remember buying with my own money.

A man and an angel, a desert, two skeleton elephants and a door in the background… what was Dalí  trying to tell us?

Dalí always said that he had the capability of remembering his dreams so well and in such vivid details, that his paintings were mere exact copies of his dreams.

In this case, Dalí’s dreams have always looked upon my dreams.

In 2015 again I was lost. Many things happened and I wanted to escape reality again. Someone suggested it was time to do it the old way, and by that he meant to start drawing again.

I was so scared. I was so so scared to open up that bottle. Would it stink or would it smell like roses? And what if the white canva was going to swallow me alive?

Without even noticing I was drawing again.

At first it was harsh. Very harsh to look at those timid, rotten lines that wouldn’t come up as planned no matter how hard I tried.

I was regretful for losing something so precious: a way to heal myself.

Those lines saved me again.

So these 1000 people who are now following the result of this healing process might be there by chance, only because I’ve got lucky once, and they’ll get tired soon, or maybe they don’t like my work that much, it’s just that it’s free…

But for me they mean the world.

For me they’re my desert, my elephants and my angel.

For me they’re my door.